During the first semester of this year, I decided to take the “Introduction to Game Development” course at the University of Brasília where I had to create a game engine from scratch using only SDL and a game using it, which we named Poïesis. Here, I want to share one of the most exciting findings I did while research game engine architectures.

I was the only developer in my team, so I tried to do something different. I wanted to design a game engine that was easy to extend and allowed heavy modularization in small and reusable bits.

My first trial involved a hierarchical game engine.The idea is intuitive and, probably, will be the first guess for anyone that try and develop games: make a parent class that implements generic methods to extend it with children classes. Usually, GameObject is the first class in the hierarchy tree, with essential methods for objects in the game, such as sprite rendering and updates.

Let’s see an example: I want to make an alien and a penguin objects, where both are able to move around the world. In a hierarchical game, I would first implement the MoveableObject class, with the logic for moving objects in the game world, then I would make AlienObject and PenguinObject classes inherit from it and, finally, implement their specific methods. 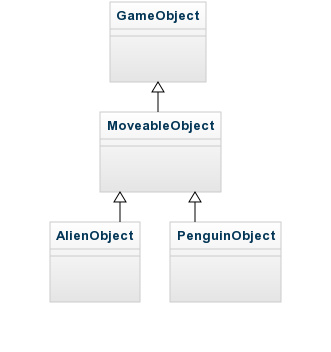 Nice, right? Well… this works for simple programs such as the example above. However, problems arise when writing larger games, which usually have dozens or hundreds of classes with several logical interdependencies. I’ll illustrate it with another example.

This time, I need to expand the game so as the alien can shoot, but not the penguin. In order to do that while allowing future classes to shoot as well, I can use a programming language that allows multiple inheritance, create a ShootBehavior and make AlienObject inherit from both ShootBehavior *and *MoveableObject. This is a feasible but undesirable solution since, for most programmers, even reading the words “multiple inheritance” gives them nightmares. Of course, we can move all shooting logic to MoveableObject *or GameObject*, but that’s definitely not a reasonable OO solution since it violates the Single Responsibility Principle. 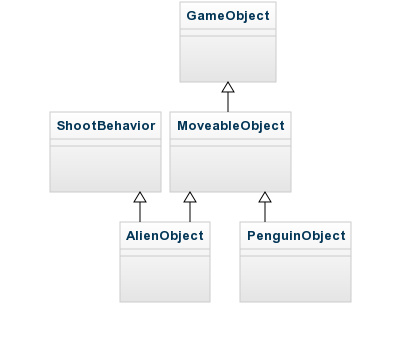 Say I need smaller penguins in the game, which are pretty similar to the original one but with a few particularities. It is natural to create a SmallPenguinObject class that inherits from PenguinObject.

Now, I may write some AI logic for the small penguin which, curiously, I need to implement in the alien as well. The problem is: these classes are in different hierarchy branches. How can we implement the same logic in both classes without appealing to code replication? 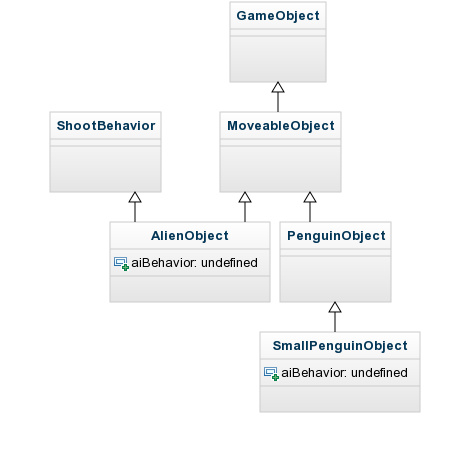 Tough problem, isn’t it? It turns out that some people have already faced this kind of problem before and thought out a solution by modifying their idea of what constitutes a game object. Instead of implementing the game logic directly in each object class (such as AlienObject, PenguinObject, and SmallPenguinObject), this logic can be built from components that give the objects some behavior.

For instance, in order to make an object move, I can create a MoveableComponent class with the code required to move its attached object in the world. Then, all moveable objects will have an MoveableComponent instance that is executed by the game engine, therefore, moving it in the game. 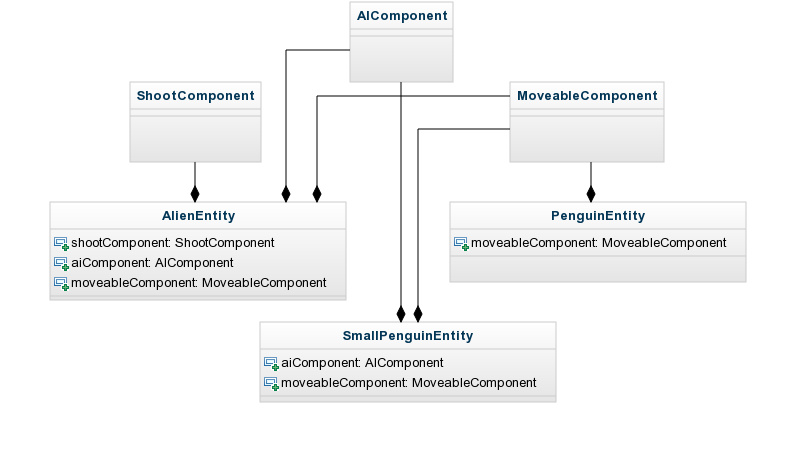 The approaching of building objects by attaching components into it is, roughly speaking, an entity system. In fact, in a true entity system, game entities (objects) are simply ID numbers which have components attached to it. Components just hold data that is processed by systems, the place where behaviors are implemented. An entity manager is responsible for providing query methods that select entities and components according to the desired criteria, as well as managing addition, deletion, and attaching of entities and components. Finally, a system manager runs the systems, executing the game indeed.

What are the benefits of this an entity system? Well, components are generic enough to be inserted in any future game object I may think of. Suppose I decide, months from now, to introduce ants to the game that require the same AI logic used by the alien. With an entity system, I don’t need to change anything in the inheritance tree. An ant needs only to contain an AIComponent instance and, voilá, it’s done! See? Full code reuse with minor modifications. Virtually, an object can have any kind of behavior by just attaching more components to it.

Moreover, in an entity system, the game object simply becomes a container of components, whom are responsible for behaviors and implement the game de facto. Therefore, game object classes don’t grow with time anymore and can respect the Single Responsibility Principle.

Clearly, this approach introduces some complexity into the project and it isn’t recommended for really simple games. However, I found that my productivity when developing Poïesis drastically increased by using an entity system. It was also a truly enjoyable experience.

Got interested in learning more about entity systems? Me too! Although this game was the first project where I applied this theory, this architecture definitely isn’t restricted to game development and can be applied in network systems or cloud computing. Below, I put the main references that influenced me while developing my game engine. I strongly recommend to read them in order to get a better grasp on the power of entity systems.